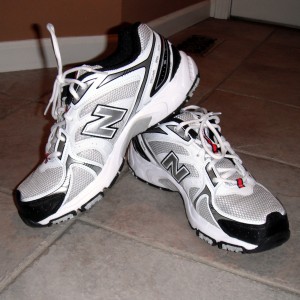 “Hey, have you taken this class before?”

I was standing outside the aerobics studio at my gym waiting for my favorite step aerobics class to begin. I turned toward the sound of the voice and was surprised by what I saw.

The young lady was probably in her mid-20s. She had blond cornrows with pink ribbons woven into the braids that went all the way down her back. Her skin was an unnatural orangey-tan color.

It’s hard to describe what she was wearing. Have you ever seen a beauty pageant? During the swimsuit competition, the contestants wear jewel-encrusted, glittery swimsuits with sky-high stiletto heels. The outfits look cute and all, but no one in their right mind would wear a swimsuit like that to the beach. The girl at the gym was wearing “pageant exercise clothes.” Sure, the rhinestones and silver spandex looked fun, but I couldn’t imagine exercising in that outfit.

“GREAT!” she chirped and smiled widely with her fuchsia-painted lips. I noticed with dismay that she had silver eye shadow up to her eyebrows and lots of mascara. “I’ve never done step aerobics, but I’m excited to learn!”

I consider myself a positive person, but this girl’s enthusiasm was off the charts. I couldn’t put my finger on it, but something felt off, like she wasn’t being completely genuine.

We entered the class with the rest of the group and started setting up our step benches and risers. Beginners usually put the bench directly on the ground. The more confident you get with the routine, the more risers you’ll put under your bench for a harder workout. I use 1 set of risers, but most of the class uses 2 sets of risers. The new girl put 2 sets of risers under her bench.

“Uh, you might want to start with no risers…” I said.

“I’ll be fine! I’m in really good shape.” She seemed confident. Who knows? She was thinner than me, so maybe she was in good shape.

The dance music started playing, and the instructor began calling out the moves. The new girl tried to keep up, but I could tell she was having trouble getting on and off that tall step. She fell off a couple times and would stand there with her hands on her hips and her brows furrowed together like she was trying to figure out how to make it work.

After about 15 minutes, I took a quick break to grab a drink from my water bottle and to pat off the sweat with my towel. It probably shouldn’t have surprised me that the girl had no water and no towel with her.

Finally, after about 30 minutes of struggling, the girl walked out of the studio leaving her step where it was. The instructor looked visibly relieved that the girl gave up. After class, I said to him, “I feel bad that the new girl left early.”

“Yeah,” the instructor said as he put away the step and risers. “But she didn’t even have the right footwear.” I hadn’t noticed, but apparently she had been wearing those trendy “fitness shoes” with the curved soles rather than real gym shoes. It was another sign that something was off, that she was trying to be the idea of what a fit person should be.

The girl at the gym made me think of times I might not have been genuine with myself. I remember trying to dress cool in high school although it wasn’t my style. I even spent a whole year hanging out with “the bad kids” even though I’m about as bad as a teddy bear.

Have you ever tried to be something you’re not and later realized that you’re not fooling anyone?

How do you stay true to yourself instead of the idea of what you think you should be?

Posted in Health+Fitness, Self Help and tagged Fitness, funny, happiness, neighborhood, truth
← Being Mindful of Other CulturesShow Your Gratitude With a Thank You Jar →