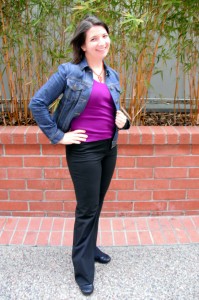 Do you ever get the feeling like the Universe is trying to tell you something, if only you’d listen?

These pictures were taken down the street from our neighborhood Starbucks. Not pictured is my soy latte and Chris’s caramel apple spice just off camera on the brick ledge.

I was complaining to Chris the other day about how I wish Starbucks’s seasonal drink, the pumpkin spice latte, were vegan. Have you tried a PSL? Apparently, it’s bigger than Jesus. Here’s a marketing video Starbucks whipped up:

Sounds great, right? But I read on a few vegan blogs that the PSL can’t be made vegan even if they use soymilk and no whipped cream. There’s condensed milk in the actual pumpkin spice mix.

So I was boo-hooing to Chris about the lack of scrumptious fall beverages for vegans (hey, maybe I should stop that), and he said something rather profound,

Huh? How could NOT making me sugared-up and caffeinated be for the best?!?

My husband knows me way too well. He knows that if the PSL could be made vegan, then I’d be in line to get one at least once a day—twice if it were cold out. And that’s not in my best interest.

You see, my muffin top has been getting more…um, muffin-y. I haven’t been making the best food choices.

Here’s an anecdote that illustrates my point: Chris and I were at the fudge shop at Pier 39 the other day. Chris got a pretzel covered in caramel and nuts. After a few bites, he exclaimed, “This is like eating the coating of a caramel apple—without the DAMN apple!”

There you have it. My diet has been lots of processed junk, candy, carbs but no “damn apples.” (On a side note, I almost titled this post “Without the Damn Apple.”)

I may be a vegan, but there’s a lot of unhealthy vegan food out there too (like Twizzlers, my secret lovah). So maybe it was for the best that I can’t frequent Starbucks every day for a cup of sugary goodness.

Perhaps I should take this as a hint from the Universe (as if my tight pants weren’t already a hint), and use this as a reminder to eat healthier this fall. C’mon—it’s FALL! It’s harvest time, and the farmers’ markets are bursting with yummy squashes, Brussels sprouts, and yes, apples.

What do you think? Has something happened in your life that sucked at first but in the end was for the best?

Posted in Fun, Health+Fitness, Self Help and tagged Fitness, food, neighborhood
← LoveThere’s No Room In My Life For Bullies →