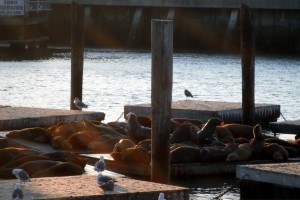 About 20 years ago, some unwelcomed guests invaded San Francisco.

For unknown reasons, dozens of sea lions swam up to the tip of the peninsula and settled onto the wooden docks of Pier 39. People were very concerned.

Where did they come from?

Why are they here?

Why won’t they leave?

What can we do about these damn sea lions?

The fishermen and boat owners were not pleased about the sea lions commandeering the pier, to say the least. The animals were smelly, they took up a lot of space, and they barked constantly.

Many ideas were thrown around about how to get rid of the pests. Some people suggested playing loud music to drive the sea lions away. Others wanted to install electric currents in the pier that would shock the animals if they jumped onto the dock. And some cruel individuals suggested covering the pier with broken glass or shooting them.

Finally, the city of San Francisco decide to do something completely radical.

They decided to let the sea lions be.

When I first heard the story about how the sea lions came to live at Pier 39, I was amazed by how kind and, well, zen the approach to the problem was. The city officials saw the pier overrun by wild animals, and someone had the gall to think, “Is this really a problem worth fixing?”

If you don’t know, the sea lions at Pier 39 are one of the biggest tourist attractions in San Francisco, second only to the Golden Gate Bridge. People come from all over the world to see the untamed creatures who invaded our turf.

Best of all, the sea lions come and go as they please. This isn’t a zoo, there’s no fence, and no one feeds them or cleans up after them. In fact, the viewing public is kept far enough away so that no one can touch them or throw anything at the animals.

The businesses on the pier make a lot of money off the people who come to visit the sea lions. So in the end, it was win-win for everyone involved.

Pier 39 is a short walk down the street from our apartment. Chris and I went to see the sea lions the other day. It was so peaceful to listen to the sounds of the ocean and the occasional bark from the napping sea lions.

Sure, the city could have done something to dissuade the sea lions from claiming the pier for themselves. But sometimes choosing to live with a “problem” is the best solution.

Sometimes you may have a problem that you really could change. I’m putting out the thought that sometimes it’s best to let it be.

What in your life have you decided to just let be? Maybe a crooked smile that gives you character or your favorite chipped mug that’s still useful?

Share your “let it be” moments in the comments!

Posted in Self Help and tagged animals, neighborhood
← Be Good to Yourself For No ReasonSinging in the Non-Rain →